why or why not?

The hardest thing about doing anything, is that you are doing it for everyone along with yourself with the chance that no one will hear, and the place you put yourself in is a place everyone can attack. That in itself may be selfish, that you want someone to hear and appreciate your voice/art/idea the way you have, but on some level it must stem from a desire to share. The same way when you find a really good book, or film, or music you know someone else will like and you hold onto that piece of work and will even defend it because you see it for its merits. And you are thankful for those merits because for whatever time you had an escape, you had something that you felt was great.

On the part of the creator I'd argue it's even more difficult, when you hold that part of you that identifies with the art you are not just risking something that gave you escapism and joy for a time, you are holding up something that is deeply a part of your release. At least if you care about your work.. than what you hold up is almost everything. And having that knowledge as you sit down and go over your work is one of the most terrifying things. I think artists have a tendency to be both the most blind and critical of their own work, in one sense I see them becoming blind to the flaws of their work so they can just release to their passion without hesitation because that is the only way to get it finished, and in another sense I see them agonizing over every out of place detail or miss-step along the way because that is the only way to get better. Every chief considers himself food critic, every artist a authority on their craft, every writer, and so on and so forth. Everyone is a critic, everyone.

And yet the anxiety ridden artist, over-stressed writer, and depressed performer still sit down to their craft. For a time they shut down that part of their brain that asks "why bother", they say "because" and in their release find catharsis in their work. That catharsis shows in the artist and the understanding audience will see it as something true, because at the end of the day it's the way it's done inside the artist that makes it distinguished. And with time that internalized care for the doing, that passion and obsession over the art becomes the guiding light of self criticism and refinement, and in time the informed critics see that as improvement, as a refined craft.  But the audience will not always be understanding and the critics will not ultimately judge the material by the craft or its stand alone merits. And worse then that the artist will not always be within their work nor will they have reflected upon their work enough to take criticism as constructive.

When I work there are a few things that are always going through my mind. 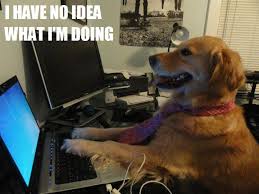 All of my life I've been proven a novice... All of it. I'm only halfway decent at anything I consider myself "skilled" at. Anytime someone gives me a task I plan out my procedure based on what experience and education I've had and then look at the task realizing how blatantly lost I am. Only occasionally do I have moments when I'm less lost than the people around me, but it's clear I'm only a step if that ahead. I'm a assistant chef for a living and I can't do anything for myself without burning at least one thing every other week. We're all just stumbling through life, it's okay to acknowledge that. Every professional makes the occasional novice mistake. It's perfectly within the novice's right to be kinda terrible at what they do. I hold this saying to heart so I feel a little less pathetic every day, I hope it helps you too.

We are the incomprehensibly small and insignificant specs in the briefest moment of time and space and the entirety of our existence will make no difference.

This will very likely be fact to some effect. Nihilists look at the mother and say "Even if you love your child ever day and work hard to provide for them, there are days when they will hate you, they might even abandon you. When you are old and weak they will be spending too much time with their own families to visit you when you are lonely. You feel fulfilled and individualized by a role that is a simply biological function and ultimately meaningless." they say to the artist "Your work will be misconstrued and ultimately forgotten by the few that recognize it. You're position only fills the world with trivial appeal while you could be doing real good in the world. You're fulfillment is prideful and self-centered, who are you to think you deserve what you've earned for your work?" they say these things to the soldier and to the teacher. But I don't believe nihilists are seeing it through all the way. They view the act as insubstantial because the end result, but I don't think they really think about the fact that it's still happening despite the result, or what that might mean. The mother knows that her child might leave her, but when she goes on loving and devoting herself to her child regardless, when she is doing the act for the sake of the act doesn't that make it more pure? If a mother loves her child because it is her child and she feels at her core the thing to do is love it, that she'll fight herself in moments of anger and frustration because despite herself she loves her child, doesn't that make parenting so much more pure? When the artist looks at their art in the grand scheme and sees how it means nothing but continues despite everything doesn't that make the art that much more genuine and possibly important a thing?

I think this sense we have towards one another, this awe in the face of true artistic integrity is a reflection of our value of ambition in its most basic form. Because that is a place we can empathize with. When someone wants to write a novel to help pay for their third house it's not something we can easily relate to, it and its owner are just not real to us. When we write short stories or novels we do it for the challenge of doing it. We do it for the love of writing. And when we see someone that has maintained that kind ambition we can relate to, it can be a kind of religious experience for us. We see our favorite musicians or actors, or go to book signings and become star struck. Because we see that ambition maintained in the face of everything as something great and human. Maybe we empathize with that kind of pure ambition, without the money or fame, because deep down we don't consider ourselves good enough to get to that point of fame and wealth...  maybe it's just because deep down that's not something we really want. Typically people say they'd rather do what they love and have to do whatever extra work to make enough to just get by than be rich and not be able to do what they love...

I think this says alot about us.

I don't know what anyone will think about this or what they'll get out of it, but I wrote it. A part of me wishes  I could say I don't, but I do care what people think and get out of this. An overwhelming part of me cares because this isn't me shouting out into a empty moment in time and space this is me sharing a thought with you, the reader. I hope it finds you well. I hope you think a little better about whatever it is you do but mostly I hope you feel better about yourself. Not more inflated, this has nothing to do with ego. This is not about perception, this is about self worth. Ego is a sense that is compared against other, that is to look at a mirror and think of yourself in the terms you might imagine or hope to imagine other's consider you. Self worth, I believe, is a sense of looking in the mirror and acknowledging a human like every other human. A thing that has unimaginable greatness within it, a thing that is inherently beautiful, and flawed,  hilarious, profound, and caring, and so very valuable.

Goodnight.
Posted by Wes at 9:57 PM No comments: